If you have tinnitus, you know it. Tinnitus is a phantom ringing, buzzing, whooshing or whistling sound in one or both of your ears. Tinnitus affects people differently. For some with tinnitus, the issue is simply a slightly bothersome fact of life. For others, tinnitus can be extremely aggravating, and can cause anxiety and disturbances in daily life.

Tinnitus is defined as “the perception of noise or ringing in the ears.” Tinnitus is described as a “perception of noise” because although it sounds extremely real, the ringing or buzzing one hears is not actually a physical sound in one’s environment. Instead, the brain of a person with tinnitus incorrectly perceives these sounds for mostly unknown reasons. Tinnitus itself is not a disease; instead, it is almost always the symptom of another underlying health issue, most commonly hearing loss. 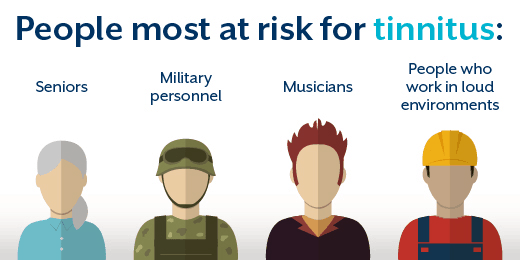 As mentioned above, tinnitus is the sensation of hearing noises in one or both of your ears that is not actually in your environment. Tinnitus can sound like hissing, ringing, buzzing, roaring or clicking. Some people with tinnitus hear extremely high pitches while others experiences lower or mixed pitches. The sounds can be present all of the time or they can come and go; however, most people with tinnitus experience the worst symptoms when they are in a quiet room or attempting to sleep at night. Some people with tinnitus experience the symptoms so severely it affects their ability to accurately hear other noises around them, or affects their ability to concentrate on daily tasks.

Tinnitus is a very common problem in the United States, affecting about 50 million Americans. According to the most recently available data from the CDC, it is estimated that about 15% of the US population has experienced tinnitus in the past year. Of these, 30% of respondents report that their tinnitus is a “moderate” or “very big” problem in their life (source: American Tinnitus Association). Tinnitus is also a prevalent issue amongst our veterans. In fact, tinnitus is the number one most commonly reported injury amongst veterans returning from active duty.

Unfortunately, there is not currently a cure for tinnitus. There are, however, multiple treatment options that have shown great improvement for people who suffer from tinnitus.

If you have tinnitus, it is important to take a hearing assessment. Almost all cases of tinnitus have hearing loss as the underlying issue, meaning it can likely be alleviated with the use of hearing aids!